Here is the official page to replace the hard drive on the IQ504. Looks like a standard SATA drive.
Posted by Unknown at 11:05 AM

Download All Windows 7 Edition ISO Files From Official, Direct Links (No Setup1.box and Setup2.box Files!) | Web Talk
Posted by Unknown at 9:32 AM

A few months back, I got wind from a friend about a DIY HDTV antenna plans. He had bought a $200 HDTV antenna that did squat, and after building this DIY antenna he was getting 20+ digital channels, with most UHF stations about 20 miles South.

Total cost was maybe $20 or so, from Home Depot. (Would have bought from Lowe's, but hey, if they won't interview my wife for a job, then why should I buy from them? Loyalty should go BOTH ways!)

After hooking it up and pointing it just a hair to the Southwest (in the direction of the main city antennas), I got like 30 channels! Woot!

Here's a link to a similar set of plans. Mine are identical, but without the back "reflectors".

I do plan to upgrade to an attic mounted 8-bay Channel Master 4228HD, so as to pull in the more remote PBS stations, and get the ugly thing out of the family room for the WAF, LOL.

Will see if I need a preamplifier or a channel distribution amplifier after sending the signal out to all the bedroom televisions.

in the attic...and got MUCH better reception vice the DIY unit. Clean installation and I didn't have to make a second DIY unit that doesn't look nearly as nice as the 4228HD. Get like 53 channels now from all over the Atlanta area. 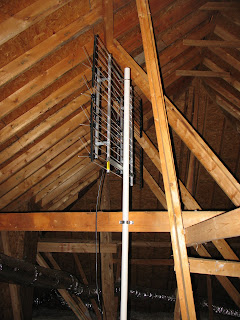