Whitson Gordon
Sometimes, you just need to do a clean install. Unfortunately, the Windows 8 Upgrade doesn't always allow for that, throwing you an error when you try to activate after a clean install. Reader uncommoner shows us a workaround for this issue.
If you do a clean install using the Windows 8 Upgrade Assistant, you should be fine—but if you've already formatted your drive or you're moving to a new drive, you can't do a "clean install" without installing an old version of Windows first. It'll let you install Windows 8 cleanly, but when you go to activate, you get an error 0x8007007B, saying your product key can only be used for upgrading.
If you get that error, here's how to fix it:
When you get back into Windows, you should be able to run the Activation utility and activate Windows as normal, without getting an error. Obviously, you could use this trick for evil, but it has its legitimate place too—if, say, you're upgrading your hard drive and want to do a fresh install on it, or if you formatted your drive before upgrading.
We haven't had a chance to test it ourselves, but it's been well documented around the net, so we're confident it should work for you if you're getting this particular error. If you give it a shot, let us know how it works for you in the discussions below! Thanks for the tip, uncommoner!
Source:
http://lifehacker.com/5984278/how-to-do-a-clean-install-of-windows-8-with-an-upgrade-disc

After perusing the web for a cost-effective iTouch wall mount, I decided to try my own hand (and tight wallet ) at making my own wall mount.  My iTouch from 2009 barely holds a charge, so it is to be relegated to wall duty as a WiFi sound portal for my basement billiards room and bar.  Power will be from a USB plug and amplifier behind the wall.

I had a pair of wall-speakers left over from a previous custom home build, so those were free, and mounted quickly.  Fortunately, I had access to the back of the wall inside the utility room, so it was relatively easy wiring everything up, but this could be done by fishing wires inside a wall, and running them along behind the baseboards, if need be.  The amp and USB power plug could also be wired easily, too, with a low voltage wire portal that exits the wires right above a wall outlet.  [Probably hiding the transformers inside a wall would be do-able, but could be a cause of a very rare, but dangerous fire... just sayin'.]

A Lepai Class-T amp from Amazon was mounted on a wall stud.

The pieces for this DIY iTouch mount were picked up at Michaels for less than $10.00.

I cut the thinnest piece of wood to both fit the frame dimensions, and from that fitted wood a rectangular cutout to match the face of the iTouch to ensure not only the screen was fully visible, but also the camera and the front button.  I sprayed a few coats of black with a hint of copper to match the frame's paint.

The iTouch was loosely fitted onto the mat-board, and small birch wood pieces cut to reinforce the iTouch on all four sides, making room for the headphone jack and the 30-pin connector.

Once fitted, the actual wood frame was marked where the wires would interfere, and notches cut to allow their exit.  Since they are on the bottom, they won't be seen after the whole frame is mounted on the wall.  Note the notches were painted to match the frame.

A 90-degree headphone plug had to be ever-so-gently trimmed so as not to interfere with the mat-board, while allowing the iTouch to remain flat. 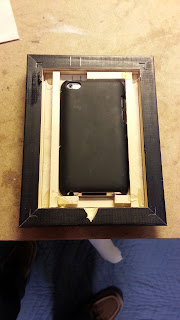 Measurements were made to mount to drywall screws at the appropriate width which allows the screw heads to ride inside the routed groove in the frame.

The frame was trial mounted to the wall and pencil marks made for the holes in the drywall to accommodate the headphone and 30-pin wires, making sure the holes would not protrude beyond the frame itself.

Once mounted epoxy was used to hold all the pieces in place, and once dried and fitted again (don't forget to have the cables installed!), a flat piece of 1/16" wood was placed over the iTouch to unify the whole system, and not allow the iTouch to fall out or away from the frame. (Note the headphone jack cutout was not complete at the stage of this photo below...but the layout of the wood and backplate are correct).

Once the epoxy dried, the whole mount was attached to the wall and hooked to the amp.

Power up!  Pandora streams loud and clear.  The Lepai amp is set for max bass, and minimal treble, and set at about 90% volume setting.  The actual speaker volume will be regulated through the iTouch screen.

Next stage:  subwoofer, and the bass can come through the wall-mounted fresh air grill for the utility room.

Geek Out & Enjoy!  Let me know if you tackle something similar yourself.